Find motivational speakers, comedians and clean entertainers in Lincoln, NE for your next meeting or event. Each of the keynote speakers listed below have recently performed their highly-engaging presentations in the Lincoln, Grand Island, Kearney, Nebraska area. 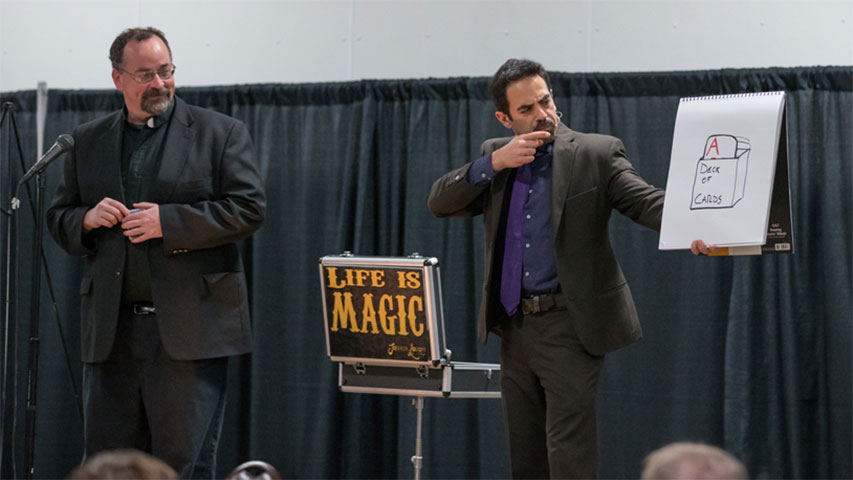 "Leslie Norris Townsend was a great hit and made the evening close with all laughing along with applause! Leslie gave a fantastic performance for our Ag Appreciation Event. This was our 44th year and she offered downhome humor with personality plus! We loved her!!! She customize her topics to cover the group in attendance. Fabulous evening!!"

"Jerry Carroll performed at our annual sales meeting, and perform did he! His style of comedy, timing of delivery, and subject matter was a huge hit with our team. Several people had sore jaws the next day from laughing so hard! Jerry tailored his jokes to the situation and our event, which made it even more relatable. He even stuck around after the performance to meet with people and share more jokes and stories. A great performer and even a better guy. Highly recommend him!"

"David Ferrell entertained a group of almost 500 ladies at our annual Ladies Night Out event. He did a great job connecting with the audience and they loved him. They gave him a standing ovation. David was very easy to work with and we would highly recommend him."

"Lyndy was awesome! He had the crowd rolling with laughter the entire night. Our group was somewhat conservative, but had a great sense of humor and he played well to the crowd and their personalities. The audience participation was great - he chose the perfect guests to participate. Our group has had concerns in the past about being to understand accents and sometimes the presenters spoke to quickly, but he did a great job of communicating clearly with the crowd."

"Jerry Carroll was a hit with our audience and was very enjoyable to visit with. He was very prompt. I talked to him on his drive to town and he arrived before the guests. He brought his own intro script which was very helpful! His material was appropriate for the audience. Jerry exceeded my expectations. Thank you very much!"

"We were thrilled with Joshua Lozoff's performance. He was very pleasant to work with and was a lot of fun interacting with the people both before and during the performance. I would give him the highest rating in all ways."

"David Ferrell made all of us laugh continuously. He was prompt, he was very professional and it was great seeing people laugh again. There is way too much stress these days and the interaction with the audience was great! I have heard nothing but positive feedback on his performance. I also appreciated any ideas that he shared with me regarding getting people up before his performance to stretch and refresh their drinks before the program started. Our Executive Director was very pleased."

"Jerry Carroll was great! He put in a plug about his state Farm Bureau membership and they just loved it! We only had 22 surveys returned but he was scored 19 as Excellent and 2 as Good. The only comment was 'have him back'!"

"We were very pleased with Jerry Carroll at our event. He was great to work with, did a great job mingling with the growers attending before and after his show. His act was great. He could really relate to our clients with his agricultural based humor. We have had several people that were in attendance that have commented since how great the evening was. I even actually had another salesman for another product stop in and mention he's had customer comment to him what a great event it was. I definitely hope it would work out to do something in the future again. Hopefully people keep talking about it and we can drive some sales and try to do a much larger event."

"We have received nothing but rave reviews about Paul Miller and his performance. He was prompt, accommodating, and fantastic at engaging the crowd. He is extremely talented and just a joy to watch."

"We were extremely happy with Paul Miller's performance. Everyone had so much fun, and we had very nice comments from the audience. He was very professional, and his show was a great fit for our group. We definitely appreciate the clean, appropriate shows you offer. I can definitely see us using your company again for our future events."

"Jerry Carroll was wonderful! While he was with us, he shared a story about coming in contact with a PTO, which is something our group can relate to. He had the audience in tears! Thank you very much and I look forward to working with Jerry again one day!"

"I thought David Ferrell was very good and funny and others thought he was good, too."

"Thank you! Thank you! Thank you Joshua Lozoff for coming to Columbus, NE and giving an outstanding performance. The evening was a huge success and we heard nothing but positive and exciting feedback! It was wonderful to see everyone that came, stay for the entire evening. Keep up the amazing magic you do!!"

"Jerry Carroll delivered a very entertaining show at our Kickoff meeting. He integrated stories and jokes that our sales reps (growers) could relate to and involved the audience throughout the show. I received nothing but positive remarks from our sales team following his performance. I would highly recommend Jerry to other groups inside and outside of our company."

"David Ferrell kept the audience involved throughout his great performance. It is indeed refreshing to have a comedian who can deliver a "clean comedy" program of nearly one hour. He was very well pre-pared to present to our audience with subjects they related to and kept them interested."

"Our audience really enjoyed Lyndy. We especially appreciated the active participation in the show that he created. Will be recommending him highly!"