Find motivational speakers, comedians and clean entertainers in Greensboro, NC for your next meeting or event. Each of the keynote speakers listed below have recently performed their highly-engaging presentations in the Greensboro, Winston-Salem, High Point, North Carolina area. 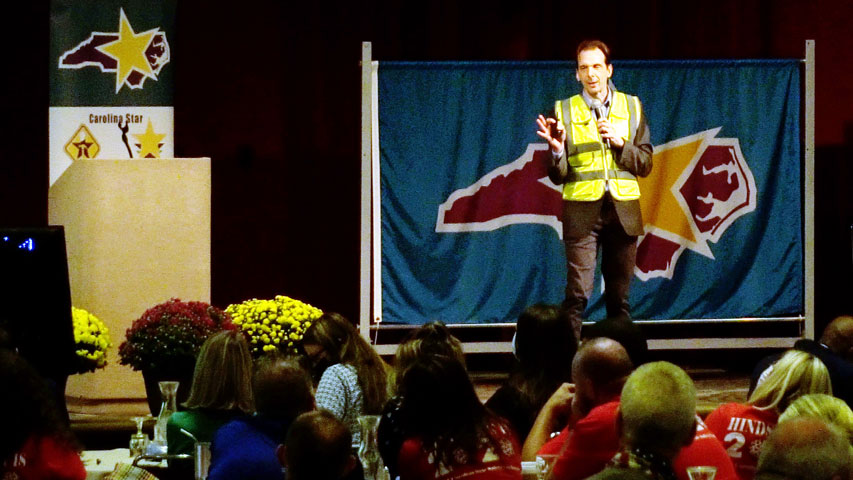 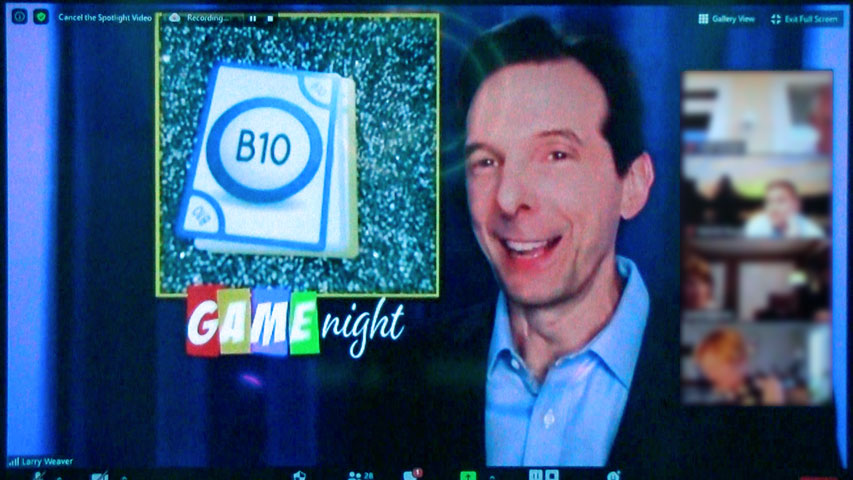 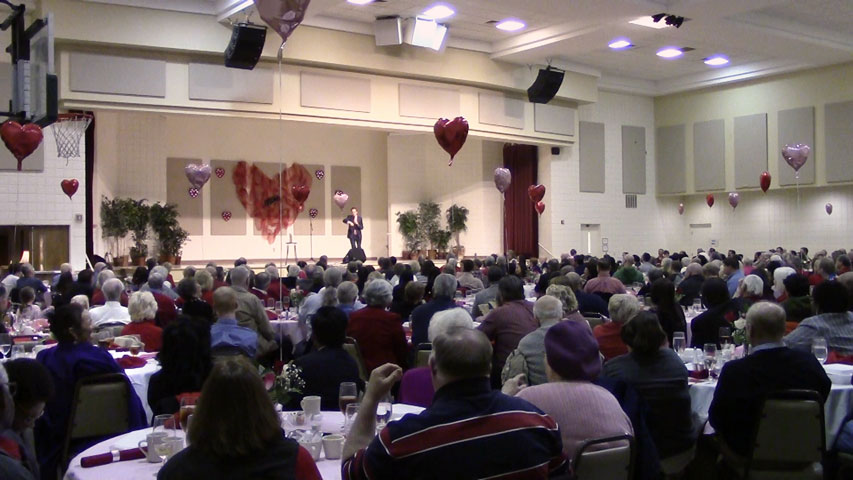 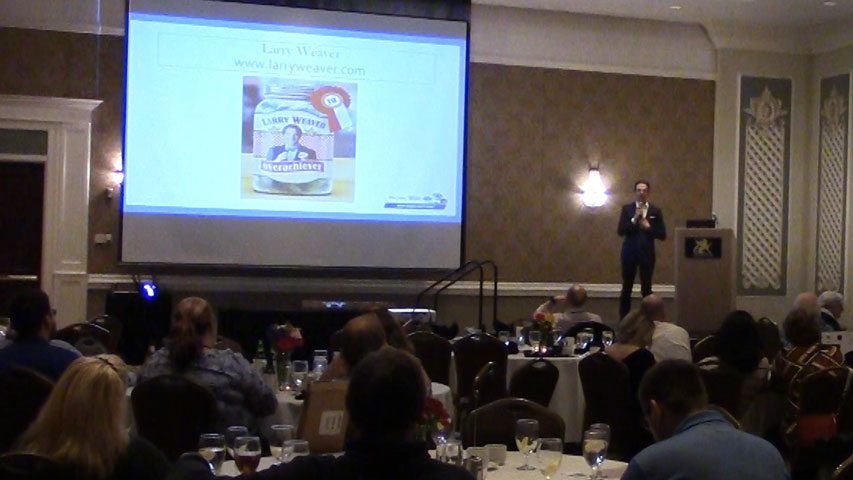 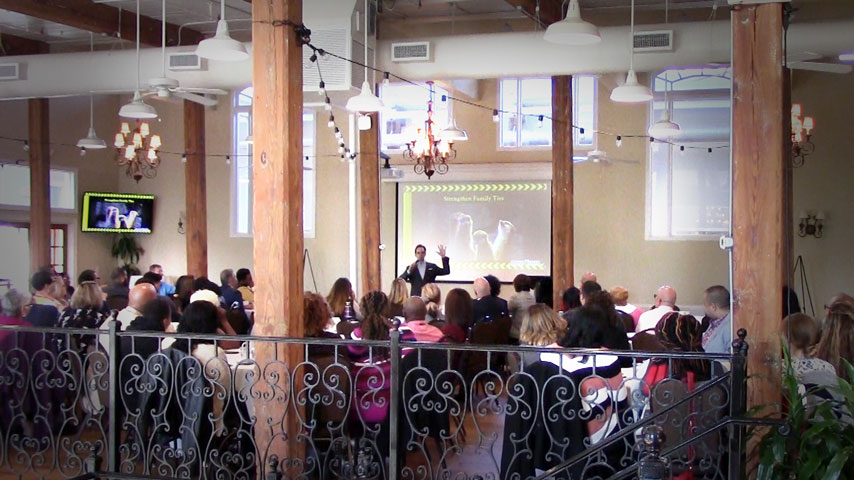 Larry Weaver - Motivational Speaker in Greensboro, NC at The Colonnade at Revolution Mill 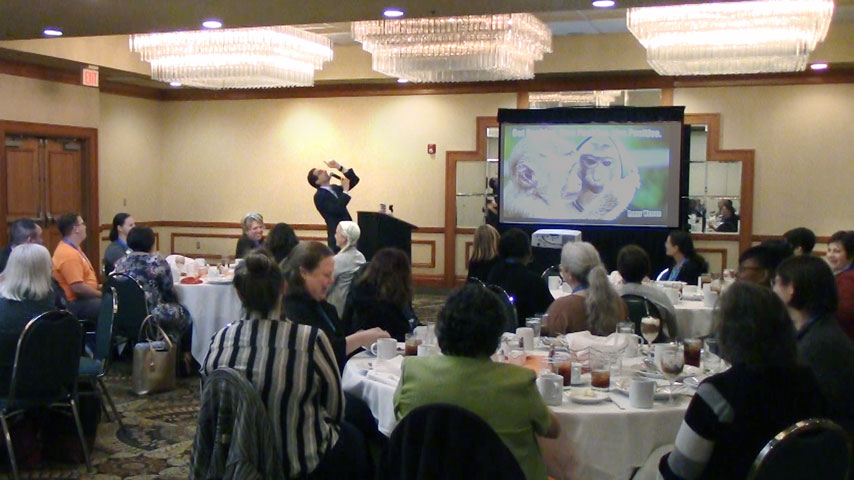 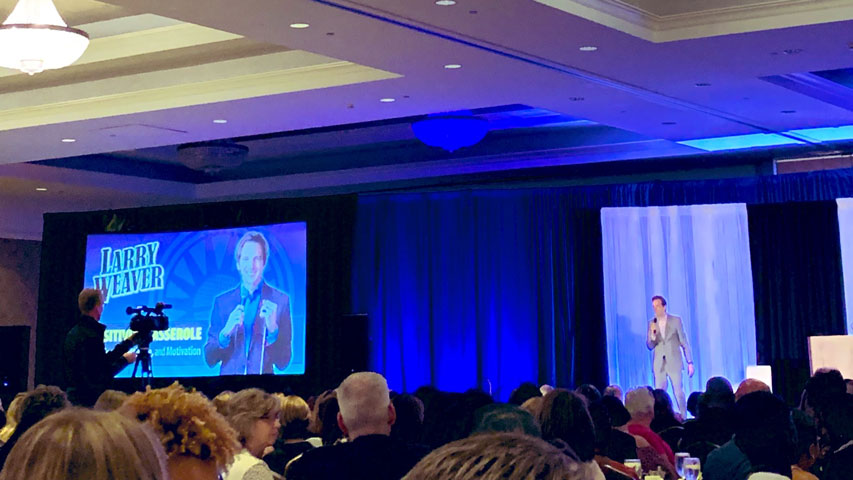 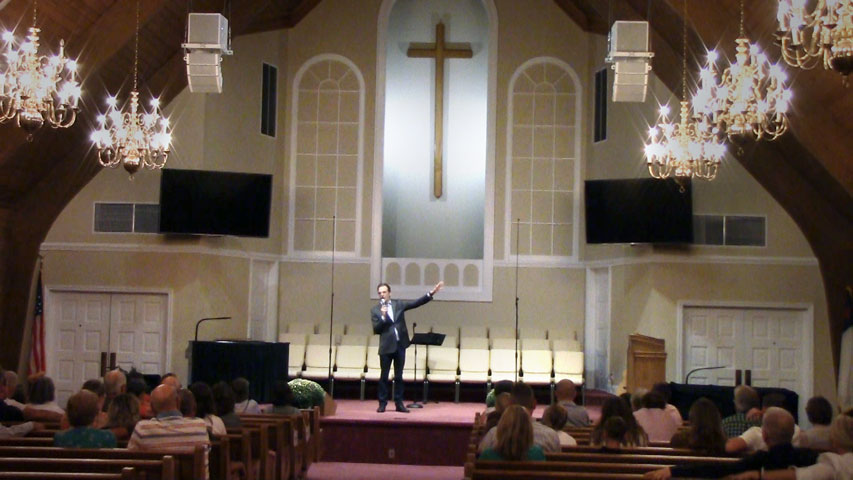 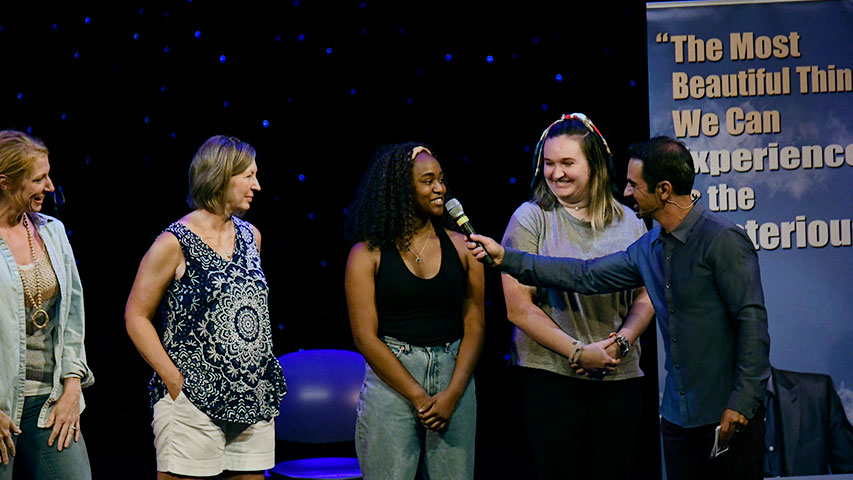 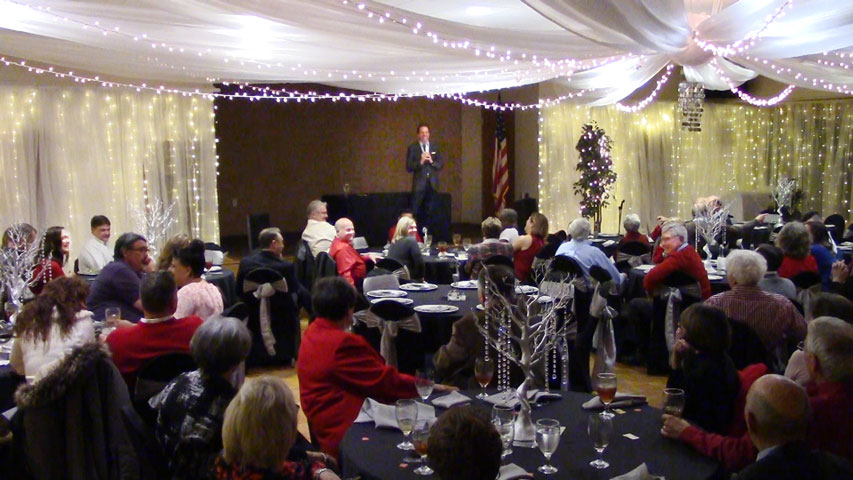 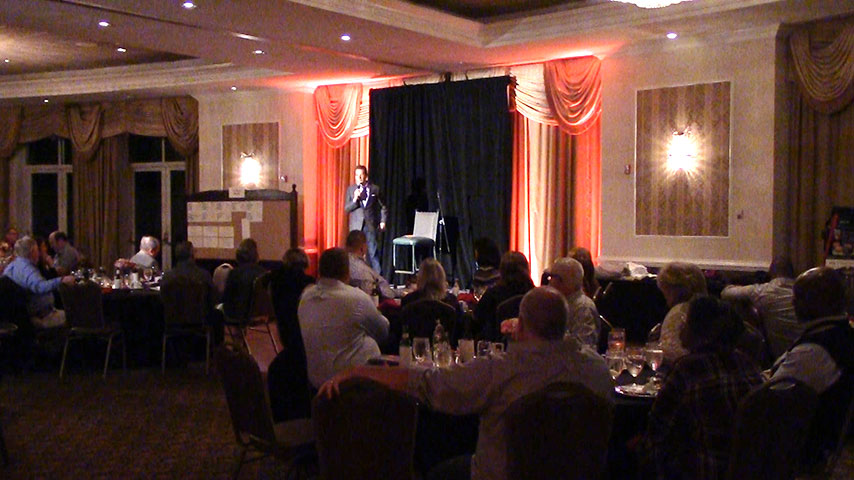 "Larry Weaver is funny, smart and professional! Our firm hosted a virtual bingo for clients. Larry performed stand-up and acted as the emcee for bingo. Not only was he funny but everyone was really impressed with his trivia knowledge. Larry was so easy to work with and was 100% prepared due to outstanding pre-show communication and professionalism. We would 100% work with Larry Weaver again!"

"Joshua was great with the attendees and everyone had a great time. Will have him back again in the future."

"Mike Goodwin is a fabulous presenter! He immediately connected with the audience and provided a session of meaningful dialogue and humor, just as we were hoping for and more! His stage presence is perfect and his comments relatable to our conference participants. Leadership and Laughter was very well received by our audience of over 700 participants!"

"We were honored to engage speaker Larry Weaver for our Second Annual Safety Symposium for the Greensboro District of the United States Postal Service. After researching speakers for our event, we were unanimously convinced that Larry Weaver was the right choice. We understood the gravity and importance of getting the right speaker, and the challenge of meeting the needs of our audience. Bottom line, Larry Weaver presented flawlessly, connecting all of us through his humor, personal stories, and day-to-day life applications ...Our event consisted of our Area Vice President, Area, Human Resources Manager, District Manager, Higher-Level local postal managers and postmasters, supervisors, city carriers, rural carriers, clerks, and custodians. Regardless of your rank in the organization, at the end of the day, we all can connect over humor about food, family, and frustrations. Humor is a universal antidote, breaking down barriers, and connecting us on a base level. Larry did not disappoint. I watched our District Manager from time to time, as the bar was high to make sure he was pleased. From a distance, it was obvious he was enjoying the presentation by the verbal and visual feedback he was giving. Later in speaking with him personally, he noted that Mr. Weaver was perfect for the event. Thank you Larry Weaver for being a part of our special event. It was the perfect puzzle piece to tie everything together that day for us."

"Thank you to Larry Weaver for helping us celebrate the 25th anniversary of our Child Health Recognition Awards! We appreciate his insights about using humor in our lives, at work and at home!"

"We had a great evening in the theatre with Joshua. The audience was enthused and thoroughly enjoyed the performance. They particular enjoyed the audience participation portions of the show. The theatre was mostly full with members ranging in age from 8 to 88. Joshua was outstanding to work with and everyone including staff and crew enjoyed the experience. Everything was 5 star- performance, communication, audience -- everything."

"Mike arrived one and a half hours ahead of his scheduled performance. He was very focused, professional, and determined to entertain the audience with his sense of humor and wit. The audience loved him! I would highly recommend Mike for your function and rest assured that he will not disappoint your audience."

"John Felts was amazing! This was the second time we had hosted a John Felts Clean Comedy Show in the past 15 months. When John first came, he kept our folks in stitches laughing so hard, for a full 75 minutes! This next time – he did it again! John has a unique way of connecting with his audience, with folks of all ages. He does this, among other things, with a self-deprecating approach that is genuine, and that draws the audience to himself. His engagement of folks in the organization he is working with is another thing that sets him apart. I love how he perused our social media pages and uses what he finds to add to his show. He makes the audience feel that they themselves are a part of the show. John’s energy is boundless. There is no organization for which I would not recommend him! There is no better entertainment value!"

"Just want you to know we THOROUGHLY ENJOYED DAVID;-) He was exactly what we desired. We believe it was simply Divine Providence in being connected with him and benefitting from his God-given gift last evening. Thank you for helping us make this happen :-) We look forward to having him again!"

"Joshua was fabulous! Joshua and I corresponded a few days before the show and he assured me all was in order. He was at the venue in plenty of time to coordinate with the DJ and even show him a thing or two! He interacted with the audience extremely well and was very prepared for his show. Many positive comments on his performance! Would most definitely use him again!"

"Larry Weaver was very good with the crowd and very easy to work with."

"John Felts was a phenomenal comedian! He did an outstanding job researching our church and community. The crowd LOVED how he incorporated the information into his jokes! John truly has a gift. He could tell jokes right off the cuff and they were hilarious! He has such a great disposition and was so easy to work with. It was like we knew him for years. His generosity towards our fundraiser was so gracious and thoughtful. We thoroughly enjoyed his comedy act and we hope to have him back in the future! I highly recommend John Felts for any event."

"Larry Weaver had a great connection with the audience and tied our Superhero Theme to his performance. His comedy was clean and we could all relate to his jokes."

"Having grown up in our area, Larry Weaver was able to mix some local culture into his act which the audience enjoyed. I particularly enjoyed hearing his Southern accent mixed in! He was down to earth funny!"

"Paul Miller was very professional. He arrived early to ensure the sound system was in order. Paul was energetic and engaging; including many audience members in his acts. I would definitely would use him again."

"We just had Rik Roberts for our annual Family Valentine’s Banquet. What a fantastic entertainer! The whole crowd from 5 years old up to 99 loved him. You would be blessed to have Rik perform at your church."

"John Felts’ comedy show was exactly what we were looking for and more. John was the perfect mix of comedy and real conversation about current issues in our personal lives and in our world. On top of that, John Felts is just a great person to hang out with. John genuinely wanted to know about the church and how it was doing. John also wanted to know about the community so that he could fit the overall show to the community to touch as many people with laughter as possible. His personal touches, stories, and relevancy reached the oldest woman in our audience right down to the teenage students. Would we highly recommend John Felts? OH YEAH!!"

"Larry Weaver was outstanding, beyond expectations. His humor and message left us energized and with something to truly think about and apply. I highly recommend Larry."

A few of the towns our nationally-touring keynote speakers have performed in include: Asheboro, Burlington, Clemmons, Elon, Graham, Greensboro, High Point, Jamestown, Lexington, Mocksville, Reidsville, Winston-Salem, and others.

Armed with a Master of Education degree, a background in the United States Army, and impeccable style, it might surprise you when Mike hits the stage and delivers non-stop laughter. His keynote “Leadership and Laughter” will empower you to recognize leadership lessons in unsuspected places, equip you with strategies to combat stress and anxiety, and provide tactics to improve workplace productivity.  Check Availability